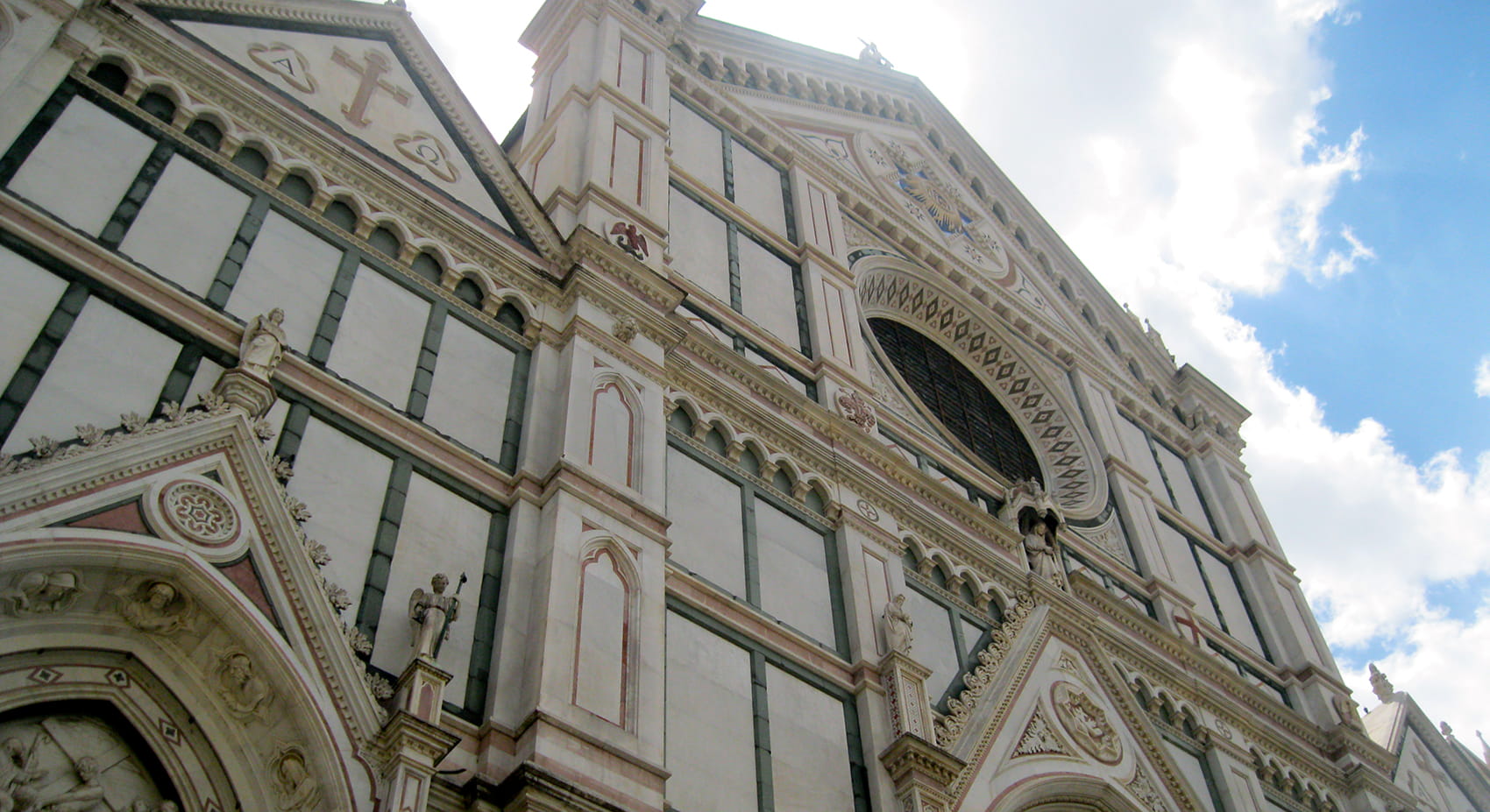 21 Jun Places of worship and civilization in Florence: Santa Croce

“ The three Florentine places of worship that played an important civic role: the three basilicas of Santa Croce, Santa Maria Novella and Ognissanti. Starting from Santa Croce, we tell you why. Santa Croce has always been the main seat of the Franciscan order in Florence. ”

Thus begins the story of Mrs Carla, of the third generation of the Simoni family here at Bencistà. A graduate in Literature and Music at the Conservatory of Florence and a great lover of Florentine art history, Carla, by now “married to the Pensione”, abandoned teaching to learn foreign languages ​​and devote herself to the cultural entertainment of the hotel guests.

According to the rule of St. Francis, the monks were particularly sensitive to the needs of the poor and the unfortunate. The Basilica was in the center of one of the poorest districts of Florence, and the monks have always shown great sensitivity towards forms of immediate relief such as the institution of a soup kitchen.

The church was built in 1295 on a design by Arnolfo di Cambio. It’s an invaluable architectural example of the new Gothic style, revisited in the Florentine key, and softer than the previous Romanesque style.

As soon as you enter, you are immediately captivated by the light that gently filters from the stained-glass windows and the majesty of the central nave, which overlooks the main altar with frescoes by Gaddi.

The basilica is known as the burial place of several famous Florentines who have shared the fruits of their intellect in the artistic, scientific and literary fields.

The great Florentine Pantheon starts with the funeral monument of Leonardo Bruni (1444), Chancellor of the Republic; similar, but later (1453-1455) is that of Carlo Marzuppini, by Desiderio da Settignano.
The Basilica houses, among others, the tomb of Michelangelo Buonarroti, with three sculptures that portray the arts of Painting, Sculpture and Architecture, all saddened by the death of the master. Close to it, the remains of Galileo Galilei, buried in Santa Croce in 1737, some 95 years after his death. It is curious how the tombs of the artist and the scientist are close together: Michelangelo died a few days before the birth of Galileo, as if to give continuity to the Florentine genius.
Ironically, not far from Galileo’s tomb there lies the tomb of the Barberini family, which includes Pope Urban VIII, who excommunicated Galielo at the Court of the Holy Inquisition in 1633.

The church also houses the tombs of Niccolò Machiavelli, Gioacchino Rossini, that of Vittorio Alfieri designed by Antonio Canova, and of Ugo Foscolo, who had praised the tombs of these famous people in a poem ”Dei Sepolcri” defining Santa Croce as the ”temple of the Italian glories” (1807). In addition to these it is important to mention the cenotaph of Dante Alighieri, whose remains, however, are buried in Ravenna. In the funeral monument, the poet is portrayed between Italy and the Poetry that mourns him.

Another example of the sensitivity of the Franciscan order is the birth, after the Second World War, of the Leather School, thanks to the collaboration between Franciscan friars and artisan tanners. The mission of the friars reveals a great sensitivity towards poor neighborhoods, where it was necessary to teach a valid and dignified craft to war orphans, thus enabling them to gain confidence through their work. This method, in addition to being modern, democratic, social and morally understanding, has proved effective.

The same sensitivity to the needs of the larger Florentine public is witnessed in the church’s murals: the various pictorial subjects of Giotto and his school are conceived and represented in a simple manner. Their function was to tell evangelical stories even to those who could not read. Unfortunately, many of these frescoes were damaged during the 16th century due to the Counter-Reformation, but were later re-evaluated, rediscovered and restored in the mid-19th century.

In the Refectory, which is accessed from the bottom of the right aisle, it is possible to admire the great wooden crucifix by Cimabue (1288), which was damaged in the flood of Florence in 1966. The crucifix shows the great novelty with which the painter began to open the way towards a language that was no longer courtly, but democratic, like the words of Saint Francis. Christ appears as a man suffering from passion, whose body gives in to pain. On the sides, the Virgin and Saint John are gathered in prayer.

Frescoes dating back to the 14th century by Andrea Orcagna were also found in the Refectory, hidden by 16th century plaster in accordance with the directives of the Counter-Reformation.

The Last Supper by Giorgio Vasari (1546) is also preserved here, originally intended for the monastery of Murate and badly damaged during the 1966 flood. The work has now been restored in all its splendor and is protected by a system of levers that would raise it up in the unfortunate event of a flood.

After a fire of 1423, it was decided that the convent should be expanded and modified, thanks to the help of illustrious Florentine families. The Medici family commissioned the architect Michelozzo to extend the monastery with a new wing that was used as a dormitory. Other famous Florentine families also contributed to the expenses. Andrea dei Pazzi, who commissioned the Pazzi Chapel in the cloister and the Art of Calimala, paid for the Library based on a design by Michelozzo.

The Cappella dei Pazzi, a work by Brunelleschi continued after his death by Rossellino and Giuliano da Maiano, reproduces the compositional spirit of the old chapel of San Lorenzo. The glazed terracotta decorations were made by Luca della Robbia.

The Niccolini Chapel, commissioned by Alessandro Allori, was started in 1584, then resumed and financed by Francesco de’ Medici in 1650. The chapel decorated by the Volterrano represents one of the architectural masterpieces that inspired the later Baroque chapels of Florentine churches.

The façade visible today, inspired by San Miniato al Monte and San Salvatore, was designed by Niccolò Matas and completed in 1863.