29 Mrz Bencistà and its resilience in times of crisis

“ The kind of emergency we are currently living seems unique, but talking to grandmother Carla we had her telling us the story of another „war“ in many ways similar to the one we are experiencing today. ”

We are going through a period that is indeed unprecedented. A global health crisis is forcing us to reconsider every aspect of our lives: in the public as well as the private sphere.

This kind of emergency seems unique, but talking to grandmother Carla (at a safe distance!) we had her telling us the story of another „fight“ in many ways similar to the one we are experiencing today.

During the Second World War, the Pensione initially welcomed the young patients of the Meyer children’s hospital; it was then occupied, until liberation, by Germans and British soldiers.

It was 1942, and for two years the war had already prevented any tourism. Paolo Simoni welcomed the possibility of opening the doors of the villa (called by family “ the House“) to the guests of the pediatric hospital of Florence, the Meyer. For safety reasons the hospital had in fact to be relocated away from the railway (Campo di Marte train station). 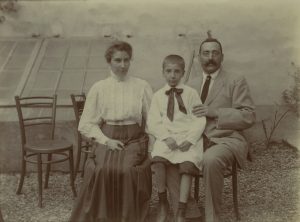 The income from the Meyer’s presence allowed the Simoni family to rent two rooms at Villa Bellagio, the neighboring property, to house the Bencistà’s furniture and furnishings to accommodate the hospital. In the absence of the necessary means to finance instruments more suited to the move of the furniture, Paolo Simoni and his son Simone personally took on the hardships by hand. Grandpa Simone still tells of the incredible effort of carrying heavy furniture on his shoulders, stressing how indispensable this operation was to save the future fortunes of the hotel.

After the two years hosting the Meyer Hospital, Villa Bencistà was in fact occupied by, so to speak, “less grateful“ guests: first the German, and then British troops. If Paolo and Simone had not moved all the furniture with their own sweat, today we would not be able to enjoy the unique atmosphere created in the rooms and lounges of the Pensione by the antique furnishings collected at the beginning of the century by doctor Pietro Simoni, the founder of Pensione Bencistá in 1925.

In August 1944 the Meyer was in fact relocated in the center of Florence into the current hospital of Santa Maria Nuova since Florence had been declared an „Open City“ (Cittá Aperta) and it was hoped, as it luckily happened, that it would be respected as such. Shortly afterwards, the Germans showed up at Villa Bencistà early in the morning, threatening to blow up the front door if it was not to be opened for them. They forced the family (who had hitherto lived in the villa sharing it with Meyer’s youngest guests) to leave their property. The family ran „as far as possible“ (i.e. in the city, Florence) leaving Bencistà to the German troops. The soldiers took possession of the villa placing their machine guns on the first-floor windows overlooking Florence.

Fiesole was freed on August 28, 1944. On the upper floor of the east wing of Villa Bencistà there are still the scratches of the British machine guns that won over the Germans freeing Bencistà from the enemy. Simone Simoni has always firmly opposed the resurfacing of the gravel pavement, wanting to keep a tangible track of the historical events etched into his memory, etched into the pavement’s stones.

During the two years in which Bencistà hosted the Meyer (1942-44) there was not a pandemic, but an epidemic of diphtheria, which affected among the many, also some children of the Simoni family. The disease was managed thanks to the heroic work of Professor Cocchi (general practitioner to who’s name a road was dedicated in the city of Florence). Professor Cocchi created an isolation area in the Tower of Villa Bencistà, assisting the families with the quarantine of their children during this terribly difficult period.

Bencistà has been closed to the public from 1940 to 1947. At that time, half of the Simoni family – fearing the business‘ failure and bankruptcy – wanted to dissociate themselves from the enterprise, leaving Paolo alone the difficult task of managing the Pensione. The villa was in fact somewhat ruined by the passage of the war and in particular by the German and English troops who had severely compromised the structure. There was also no money to invest in renovations: the hotel hadn’t worked for 7 years! 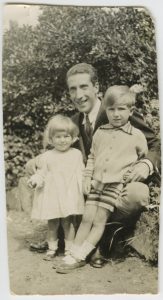 Once again Paolo was not intimidated by this umpteenth difficulty: in 1948 he signed the license to the Chamber of Commerce, determined to relaunch the business reopening just the ground floor of the villa for the few tourists who resumed their wandering.

And so it was that, in its long history, Bencistà had the opportunity to open its doors to epidemics and enemy’s armies. It neither hesitated to reopen its doors to a future which, beyond the war, presented itself with its thousand challenges, promises and opportunities.

We hope to have the courage and the resilience of our ancestors in waiting patiently, but always actively, for the passage of this new „war“ and to creatively rekindle our Pensione to fit the – certainly different – world that we will inherit after its passage.